Yesterday, the House passed the fiscal year 2014 omnibus (1,582 pages) appropriations bill, by a vote of 359 to 67.  This came after the House passed a three-day continuing resolution to give the Senate time to consider the full bill.  It now appears close to certain that the government will be funded without another shutdown until at least October 1.

Whenever the Congress passes such a massive bill, there is a chance of 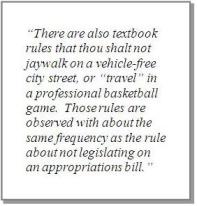 mischief.  There are inevitably small details that are tucked away out of immediate view.  Some of those have come to light already, but others might show up only after the bill has become law.  The fraternity of people who can read appropriations language is fairly small, and they are in overload this week.  So be prepared for news flashes several days or even weeks down the road.

A detailed summary of this large book would fill a medium-sized book.  To generalize, however, it is best to start with the reality that a compromise that passes a politically divided Congress will be, well, a compromise.  Each side will get some things and give some things.  In the broadest terms, the Democrats got more money for domestic spending, and the Republicans (in addition to some relief for the Pentagon) got restrictions on how that domestic funding may be used.

Thus, the early reaction to the bill is focused not only on which agencies or individual programs won or lost, but also on what the really immense number of “legislating” provisions do – which is mostly prohibiting the use of funds for particular priorities.

Without going into enormous detail, there are just a few funding decisions that are somewhat striking.  The first is that the Head Start program, which garnered many news stories when it closed its doors and turned away children during the shutdown and under the sequester, was restored to its pre-sequester funding levels.  It also received some new funding for education of very young, pre-Kindergarten children.

A second striking item is that the bill cuts back on funding for embassy security, maintenance and construction, apparently as a sign of displeasure at the attack in Benghazi.  Depending on how the particulars play out – and not rushing to judgment on that point – this raises a potential Catch-22.  One can only wonder whether, should another tragedy occur, a consensus may form that protecting embassies costs money, and failures can occur because punitive funding cuts leave insufficient resources and put our diplomats at unnecessary risk.

Beyond those priorities issues, there are some legislative directives where Republicans apparently received their reciprocal concessions for allowing more total dollars to Democrats.

Funding for several health administration programs is in some fashion prohibited to use in implementing President Obama’s Affordable Care Act.  One can only speculate at this point whether these prohibitions will increase the likelihood of continued less-than-successful implementation.

The bill caps the number of Transportation Security Administration airport screening personnel, while it increases funding for private security screeners.  After September 11, the Congress made airport screeners public employees, and provided substantial pay increases to professionalize the force.  (I was working for the Congress at the time, and there was concern there that the pay for airport screeners was set so high that Capitol Police officers could obtain large raises by changing jobs.)  So there may be yet another experiment as to whether public or private employees will yield better and more efficient service.

The bill prohibits the use of funds to enforce the ban on old-design low-efficiency incandescent light bulbs.  Opinions differ cosmically on whether the original change was an intrusive government run amok or the use of regulation to drive belated and quantum technological improvement.

The bill prohibits funding for high-speed rail projects.  High-speed rail, depending on the beholder, is either a vision of an environmentally sustainable future or a pork-barrel, overly subsidized public works boondoggle.

This discussion could go on, but there are just two more items that seem particularly indicative of the nature of today’s budgetary dilemma.

First, in a clear violation of the dictum about legislating on an appropriations bill, the omnibus rolls back a part (not all) of the December budget deal that used reductions of cost-of-living adjustments in veterans pensions to finance the relief from the sequester in the first place.

And second, concerns about moral hazard and budgetary exposure had led to increases in premiums under the federal flood insurance program.  Pressure from some elected representatives of affected communities has led to some of those increases to be postponed in this new bill.

These two items are symbolic of the difficulty that the Congress will face in trying to deal with the long-term budget challenge.  It is relatively widely understood – we certainly have discussed the point at length – that the federal budget is headed to spiral out of control principally because of the rapid growth of healthcare costs.  However, some seem to have considerable confidence that restraint on the other major category of the budget – the annually appropriated funding of federal agencies – either is the heart of the problem, or at least can be used to achieve considerable savings.  For that reason, the Congress has come back to such so-called discretionary spending restraint again and again, while leaving fundamental healthcare reform (aimed at budget savings rather than extending coverage) lying on the shelf.

Some of our elected representatives seem to go so far as to believe that the potential deficit reduction from appropriations cuts approaches the infinite.  And it is very easy to run up the score by putting future-year discretionary spending reductions up on the board well before the bills that must implement those savings need to be written.

But this bill shows the weakness of reliance on future appropriations savings to promise ultimate deficit reduction.  As just one facet of this imagined jewel, realize that two Members of Congress can be zealously united on the task of deficit reduction by cutting federal government pork, even while they – unknowingly – are totally incapable of agreeing on precisely what that is.

But at the very same time, those two Members might very well show up arm in arm, thumping each other’s backs, at a rally for deficit reduction and cutting back the size of government.

And the Congress collectively might or might not understand that veterans benefits can be poorly targeted to employed and highly successful former service members.  But when the time comes to make the necessary choices to cut government spending, it can be very hard to select the veterans in one’s community as contributors to the effort.

It is great that the Congress managed to find agreement on this year’s appropriations, and that the nation will be spared another shutdown.  But the long-term budget challenge remains, and there is little in this bill even to suggest that Washington is any more likely to meet that challenge.

"Back in the Black" provides a forum for business leaders and CED staff to initiate a dialogue with the public about the best ways to achieve sustainable economic growth and a revitalized federal budget.